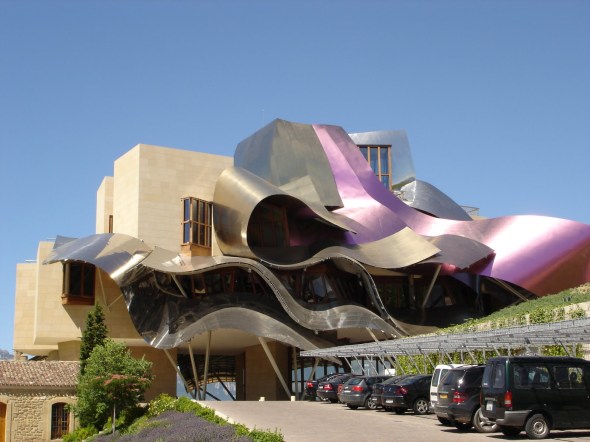 Frank Gehry was born in Toronto in 1929 and moved to Los Angeles in 1947. After he arrived in LA, he worked as a truck driver and a radio announcer. He loved art, but he wasn’t sure what he wanted to do with his life. He certainly didn’t plan to be a famous architect when he attended Los Angeles City College, or even when he enrolled in the School of Architecture at the University of Southern California. But he did become a famous architect—one of the few contemporary architects, in fact, who has achieved superstar status, to the point that his name and work are known well outside the field.

Gehry’s work is most well known for its emphasis on materials, whether those materials are humble plywood and chain link or gleaming titanium and stainless steel. His most famous buildings include the Guggenheim Museum in Bilbao, Spain; the Walt Disney Concert Hall in Los Angeles; the Jay Pritzker Pavilion in Chicago; and the Frederick R. Weisman Art Museum at the University of Minnesota in Minneapolis.

Welcome to the official blog of Statements2000, Artwork by Jon Allen. Here you will find informative and insightful articles that will teach you all about modern decor and help you find the perfect Jon Allen sculpture for your home, office, and garden.